100% Reader-Supported. No Sponsored Content. No Ads. Learn More About How We Research, Evaluate, And Why You Can Trust Us Here

The other day my boyfriend became aware that my Fitbit has a feature that reads your resting heart rate. So he promptly insisted I take it off so he could check his own.  As I was unclasping the strap, he caught a glimpse of mine.

When he put the Fitbit on, he noticed his was 77; and seemed quite satisfied with his own number. I have to admit, he isn’t a fitness slacker, so 77 made sense.

I began to protest, defending my own resting heart rate.  I had read that anywhere between 60 and 100 is “normal” for adults.

Being used to my boyfriend’s usual blunt style of communicating, I did not take offense to it; realizing he was voicing concern for my well-being.

I detest cardio and I am not ashamed to scream that from the mountaintops. I hate sweating and I resist exerting too much physical energy in anything I do. It’s kind of against my personal Code of Conduct.

I had recently rationalized to myself that if I went to the gym regularly and lifted weights I could get toned and that would be good enough, but I couldn’t easily forget my recent encounter with a nurse at our company’s health fair who informed me that my blood pressure was slightly elevated.

“Well, it could be that you were recently walking around,” she said.  Of course, I grasped on to that excuse.

Nevertheless, after looking at the Fitbit’s reading of my resting heart rate, and seeing the digits 8-4 staring back at me, I was triggered to face reality.  I knew I had to find some type of cardio activity that I don’t despise.

I have always been envious of runners because people talk about the runner’s high. I was never fortunate to get to that point.  I’ve always given up shortly after breaking a stride. Perhaps it’s because I’m top-heavy or maybe because I am just not light on my feet.

I work from home a few days a week and take a regular lunch hour.  Maybe, I pondered, I should take advantage of one of the benefits of running – which is you can run virtually anywhere and at any time.

I needed to “run” an errand at the Walgreens down the road, so I decided to take a jog down that way.

En route to the store, I could tell that damn Fitbit was misreading my heart rate, as I was completely out of breath and it was registering a measly 122.  (A part of me hoped it had misread my resting heart rate too!)

Suddenly an ingenious idea popped into my head.  When I was young, I loved to skip and gallop. I had my Latin dance music blaring.  The bouncy experience of skipping seemed like an excellent alternative to literally pounding the pavement; but could you imagine how idiotic a 48-year-old woman would look skipping down the road?

I decided to forsake my public image and give skipping a try.  Sure enough, it was much more fun, I didn’t feel like a heifer, and it got my heart rate up to a breathless 157 (which I had to verify with my smartphone’s stopwatch feature. Thanks a lot Fitbit!).

At one point, a car passed me while I was skipping to my Lou.  Briefly, I felt like an ass; but then I figured hey, they don’t know me and this is an intimate affair between my resting heart rate and me, and people can keep their noses out of it.

Alas, I don’t see myself ever becoming a runner but maybe I’ve found a cardio activity I can tolerate, and even enjoy.  Perhaps someday I’ll even experience a skipper’s high.

P.S. You don’t need a Fitbit to get started! Just a pair of crossfit shoes, or trail running type shoes. No expensive “running” shoes needed! 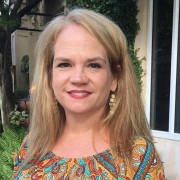 Ericka started her career as a personal trainer over 20 years ago and her goal was to help people become healthy, happy and fit. To do this she would find out their goals and provide the tools and routines to help them reach them. As her career progressed, she added yoga training to her skills to help her clients achieve mindfulness and help with clients mobility. To help more people she started bestwomensworkouts.com to help other people achieve their fitness goals with advice, tips and fitness equipment reviews.